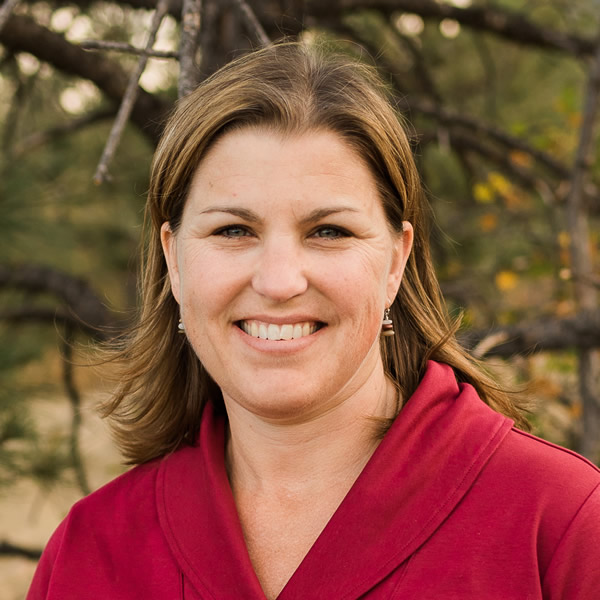 Robin is a teacher-scientist. She studies the physiological ecology of large marine and terrestrial vertebrates and now applies the scientific method to improving undergraduate science education. Robin completed her master’s degree at the University of North Carolina with Dr. Ann Pabst and Bill McLellan. She then studied African and Asian elephant physiology for her dissertation with Dr. Terrie Williams at U.C. Santa Cruz. After finishing a postdoc with NOAA and working closely with the STEM teaching community, Robin was hired as an Assistant Teaching Professor at UCSC. Robin is keenly interested in incorporating STEM practices into both large lecture and active learning versions of her courses to help all students improve core science process skills, bolster STEM identity, and reach their full potential. 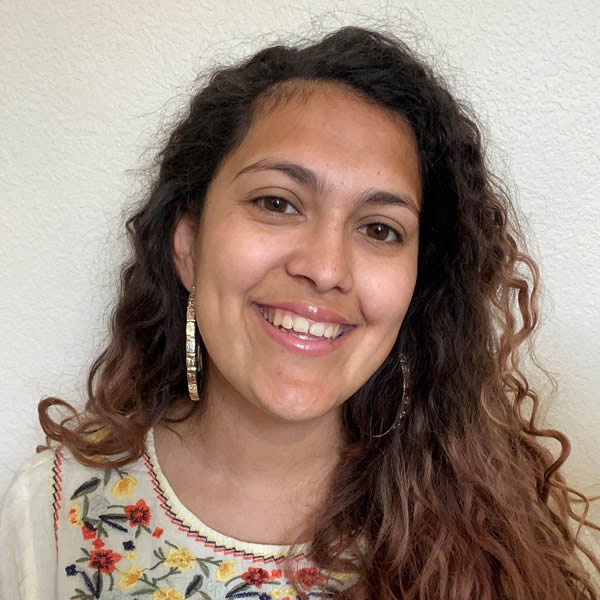 Juliana Limon is one of the Stranding Technicians for the Long Marine Lab Stranding Network. In the fall of 2019, she transferred to UCSC where she completed her BS in Marine Biology. She began volunteering for the Long Marine Lab stranding network shortly after she transferred to UCSC and began her role as a Stranding Technician in 2021. During her time as an undergraduate she participated in research at UCSC, UCLA, California Academy of Sciences, and the Monterey Bay Aquarium Research Institute. She has plans to pursue graduate school in the near future with the hopes to use genetic techniques to better understand disease in marine mammal populations. 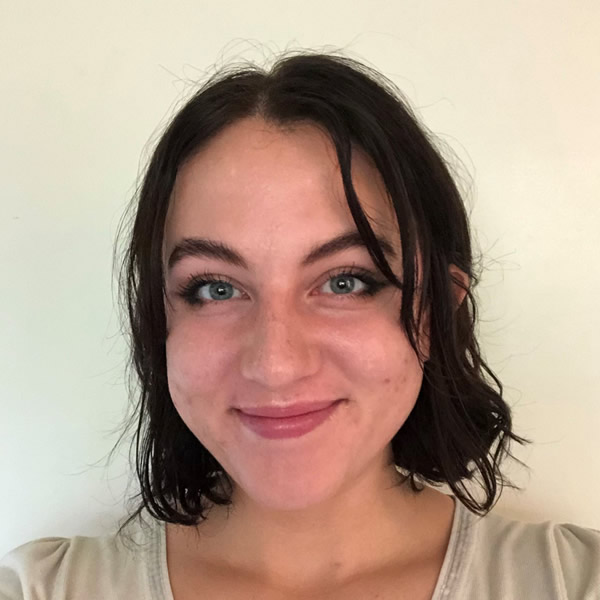 Maia Smith is one of the Stranding Technicians for the Long Marine Lab Stranding Network. She completed her BS in Marine Biology at UCSC in 2021. Maia first got started in the Survey Slugs program and worked her way up to become a mentor for other undergraduates. Additionally, she was a volunteer for the Stranding Network throughout her undergraduate career and participated in research at UCSC as well as The Marine Mammal Center. She has plans to pursue her Master’s in Education in hopes to teach children about biology and our local environment. 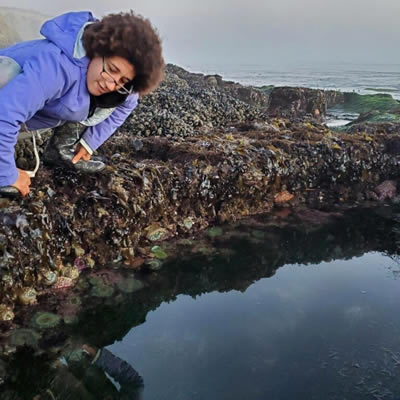 Amber Diluzio graduated from University of California Santa Cruz with a B.S. in Marine Biology. As an undergraduate , she volunteered in Dr. Rita Mehta's elongate vertebrate lab and completed my senior thesis on the feeding behavior and maximum prey size of the California Morray Eel, Gymnothorax mordax. After graduation Amber got involved with the Long Marine Lab Stranding program, where she worked as a stranding technician for a few years. During that time Amber was responsible for stranding response and necropsies of dead marine mammals and sharks in Santa Cruz county. Currently, she is a first year student in Dr. Gitte McDonald's vertebrate ecology lab. Amber's research will aim to focus on elephant seal dive behavior. 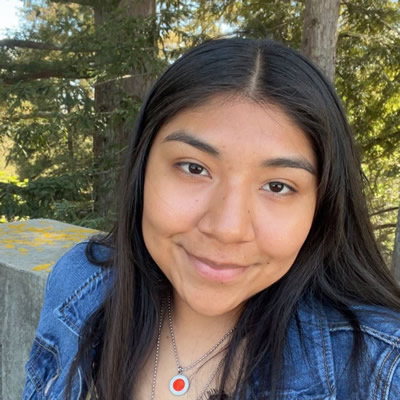 Vanessa Garcia is a senior undergraduate majoring in marine biology at UCSC. She completed a summer internship through CAMINO at the Long Marine Lab Stranding Network. Her project focused on helping a previous project based on domoic acid using the Long Marine Lab’s stranding data. She has plans to pursue graduate school in the near future with the hopes to enter the field of conservation. 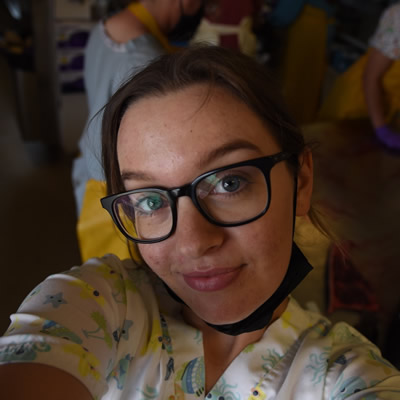 Justine is a third-year Marine Biology student at UC Santa Cruz. Through CAMINO Justine worked with the Long Marine Lab during the summer of 2022 learning about marine mammal anatomy and pathology through necropsy, and data analysis techniques using programs like ImageJ. When Justine is not in the field, the lab, or at her desk, she is out cycling on the trails or the roads with the UCSC Cycling Team. 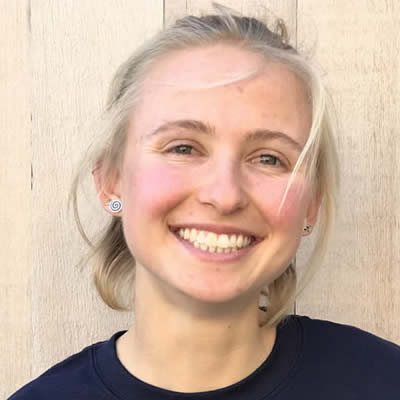 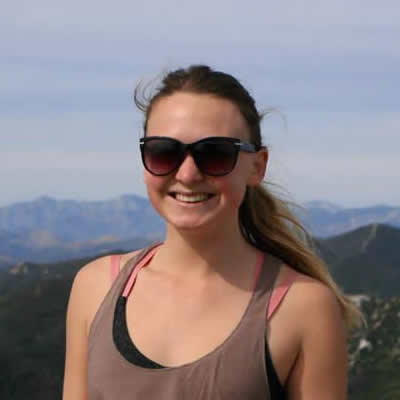 Gabrielle Lange is an undergraduate volunteer for the Marine Mammal Stranding Network. She is currently studying Marine Biology and Bioinformatics at U.C. Santa Cruz. She first discovered the Stranding Network through the Seymour Center's docent program, and has been involved ever since. Gabrielle currently mentors incoming undergraduates in conducting beach survey's, gathering initial data on stranded animals, and collecting marine debris. Gabby is starting her senior thesis on marine debris in Spring 2018. 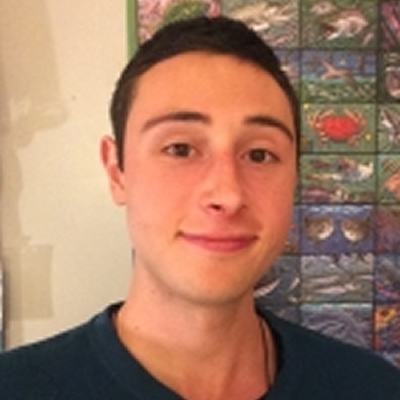 Draven is an undergraduate Ecology and Evolutionary Biology student interested in marine mammal behavior and conservation. In his current research, Draven aims to quantify mercury contamination in California sea otters through measurement of total mercury concentration in fur, liver and brain from necropsied individuals. In doing so he will also compare variations in contamination from two different otter populations along the California coast and between males and females. 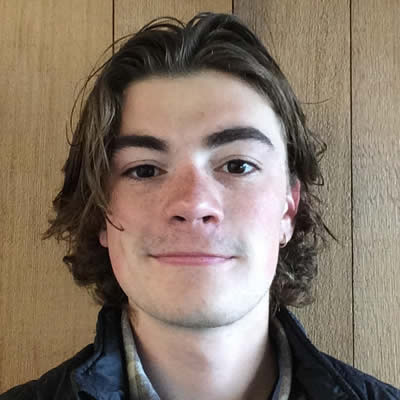 Gavin is an undergraduate in Ecology and Evolutionary Biology and has a passion for shark conservation. Currently, thousands of leopard sharks, hundreds of bat rays, and dozens of members of the lamnid family such as white sharks, mako sharks, thresher sharks, and salmon sharks strand on the California Coast each year. Particularly juveniles of these groups tend to share a carnobacterial infection that could either be naturally occurring or human-induced. While there is a robust network in place to attend to and learn from marine mammals that strand, no such formal network exists for sharks. Gavin is working to set up a shark stranding network and develop a uniform data sheet, modeled after the marine mammal Level A sheet, that stakeholders can use to collect these important data. This work is a vital first step to developing consistent, longitudinal monitoring of emerging diseases and threats to these important species. 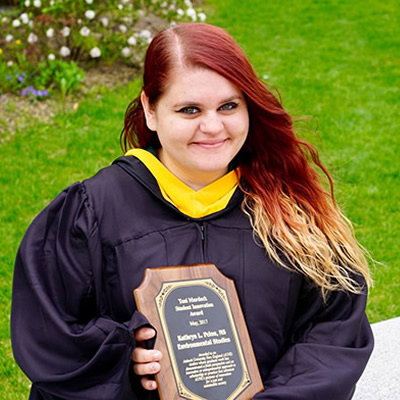 Katie graduated from UCSC with a major in Ecology & Evolution in 2014, earning Honors in the Major for her senior thesis "The Effects of El Niño Conditions on Marine Mammal Strandings in Central California". She then went on to attend the University of North Florida before transferring to Antioch University New England and completing her M.S. in Environmental Education in 2017. During graduate school, Katie created her own small business called Environerd, aimed at communicating environmental conservation science and empowering people to heal the planet through gaming. She publishes her educational games and online courses on her website. 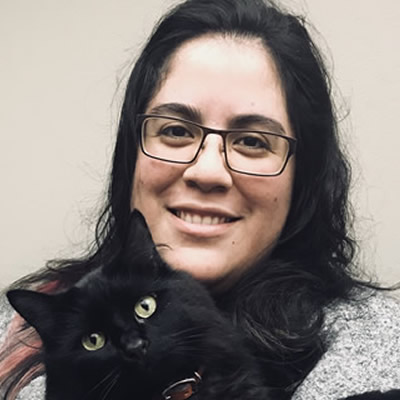 Elena Cholula volunteered in the LML Stranding network, and Monterey Bay Aquarium while completing her undergraduate work. Since then, Elena has been working at a small animal hospital in the east bay. Starting, September of 2018 she will be attending University of Glasgow for veterinary school and pursue her dream of becoming a veterinarian. 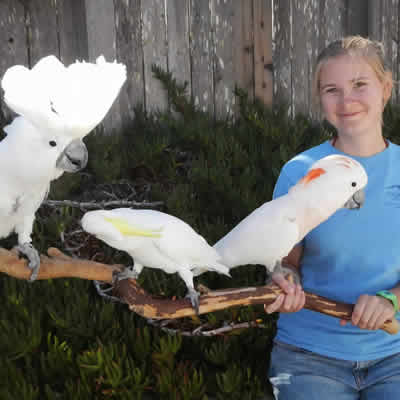 Maia graduated Magna Cum Laude from UC Santa Cruz with a B.S. and highest honors in Ecology and Evolution in June of 2013. During school she also worked as a marine mammal (and cockatoo) trainer at the Marine Mammal Physiology Project. Her senior thesis, Measuring the Resting Metabolic Rate in Cacatua moluccensis: A Pilot Study, allowed her to combine animal training and physiology research. Using positive reinforcement training, Maia trained one of the lab's cockatoos to enter her metabolic chamber and sit calmly so that she could measure a more accurate resting metabolic rate. This was one of the first metabolic rates measured for this endangered cockatoo species. Maia is now employed by the California Conservation Society as an Animal Keeper at the Oakland Zoo. She loves working with Sun bears, Siamang, Coati, Cotton-top tamarins, wallaroos, emus, flamingos and the zoo's education animals (including parrots). She continues to use positive reinforcement training with her animals on a daily to basis to help with their care and applies physiology concepts to inform care (diet changes etc.). 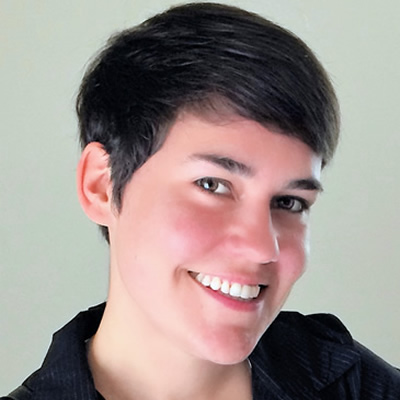 Betsy Davidson is an entrepreneur, speaker, scientist, educator, environmentalist and humanitarian.  She worked for over a decade at contribution-driven organizations like the Monterey Bay Aquarium, Pacific Whale Foundation, and Walt Disney World.  Now she is a certified high-performance coach helping people to learn to live their best life and help change the world. 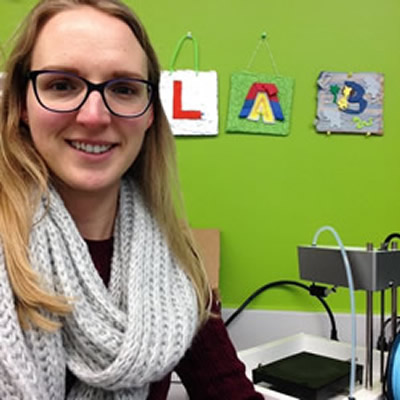 Audrey graduated from UCSC in 2010 with a B.S. in Ecology and Evolutionary Biology and a B.A. in Environmental Studies. For her senior thesis she researched vaquita metabolics and the nutritional value of cetacean milk while at UCSC. She then shared her enthusiasm for science and education as a Public Programs Presenter at the California Academy of Sciences, an outdoor educator with Camp SEA Lab, and as an after-school teacher with Mad Science. Audrey is now a middle school teacher in Sonoma County where she grew up. She teaches integrated science and is establishing a new Maker elective program. Audrey hopes to develop scientific literacy and curiosity in her students. 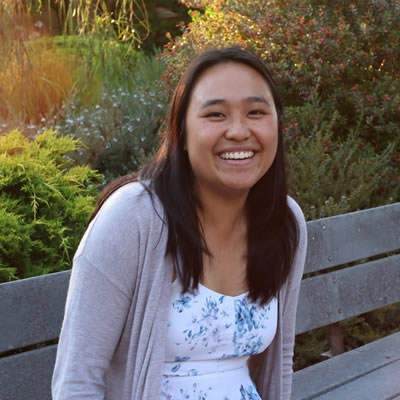 Sam Rozal graduated from the University of California, Santa Cruz in 2021 with a Bachelors of Arts in Environmental Studies combined with Biology. As an undergrad, Sam completed a senior thesis through Long Marine Lab’s Marine Mammal Stranding Program and the Dunkin lab. Her research focused on characterizing the geographic and temporal patterns of marine debris on Santa Cruz and Monterey County Beaches. She is currently a Master’s student at UC Santa Barbara’s Bren School of Environmental Science and Management. 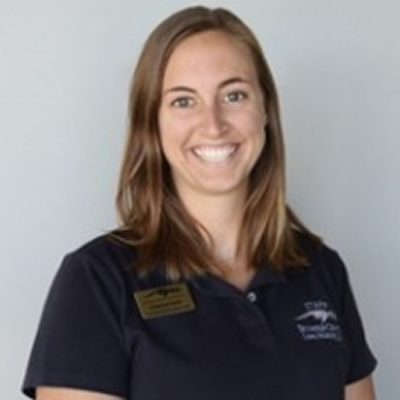 As an undergraduate, Kristen was a marine mammal stranding volunteer and did a senior thesis with Robin about latex balloons in the environment. She then went on to a Masters of Science at California State University Monterey Bay in Applied Marine and Watershed Science. While in graduate school she was a TA for a GIS class, worked for Monterey Bay National Marine Sanctuary, and was a student assistant for the Research Experience for Undergraduates. In May 2017, Kristen started as the Visitor Programs Manager at the Seymour Marine Discovery Center at Long Marine Lab where she manages visitor education in the exhibit hall and aquarium, orchestrate daily tours, programs, special visitor days, and other walk-in visitor interpretation. Kristen is excited to be part of a program that is dedicated to educating people about the role scientific research plays in the understanding and conservation of the world's oceans. 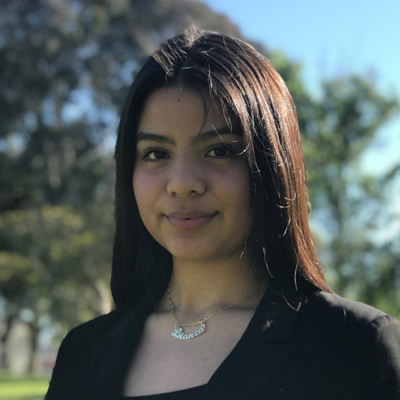 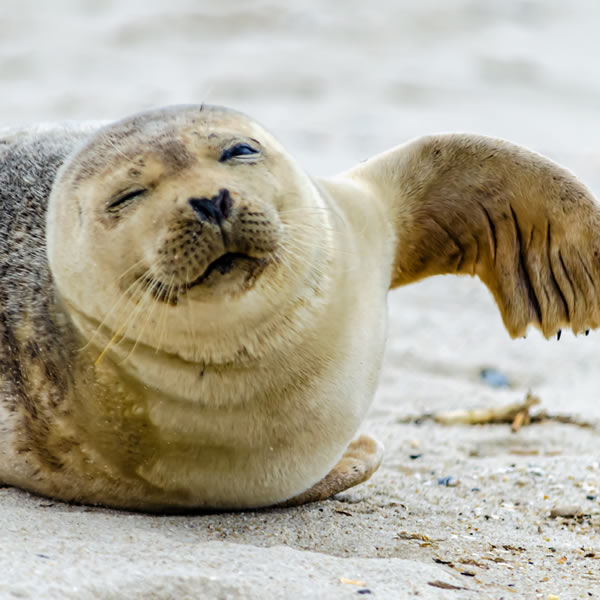